Twas The Night Before Christmas And All Through The SOC 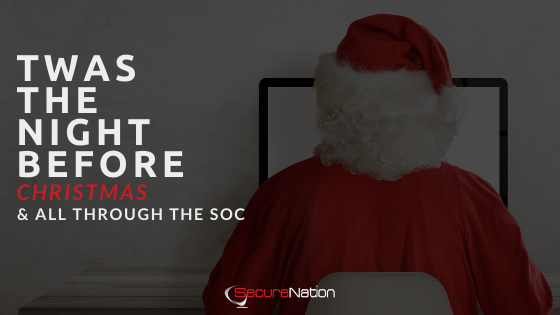 ‘Twas the night before Christmas and all through the SOC, not an analyst was stirring, not even in the NOC. The servers were all updated in fear for the preparation of holiday cheer. The CISO was nestled all snug in his bed, while a laptop was stolen with admin creds, the attacker was in, the network in peril, and the alerts now singing a dissonant carol.

When from the analyst phone arose such a clatter, he checked the alerts to see what was the matter. Away to the office, he flew like a flash, the attacker had used pass the hash. Ransomware installed that demanded a due, how would they recover, St. Nick only knew.

When what below, when their worrying eyes should appear, but SecureNation and their amazing
relationships with many a vendor. With a few calls, so lively and quick, an outside audit and remediation that would stick.

More Rapid than 7, the vendors they came, they whistled and shouted and called them by name:

“Now Tenable, Now Attivo
Now, Ilusive and Illumio,
On Cisco, On Proofpoint
On Carbon, on Black
To the top of the stack
To the top with you all
Now quote away! Quote away!
Quote away, all!”

And then in an instant, SecureNation brought proof,
That they are a VAR that is foolproof.
While the board squabbled as prices abound,
SecureNation proved they are the best around.

They brought the best deal from vendors and all,
saving you time from multiple calls.

Discounted deals bundled up in their pack,
they aren’t just peddlers opening a sack.
Their team was all friendly, their emails so merry,
offering no cause for you to be wary.

And just as the analyst came in from the snow,
they wrapped the deals all tight with a bow.
The problem resolved before it got worse,
proving they care more for the client than their purse.

They continued their work, to the vendors they whistled,
Off to the next job, this attacker now crippled.
I heard them exclaim, as they flew out of sight
“A secure Christmas to all, and to all analysts sleep tight.”